Vivid, gestural oil paintings reveal a fascination with emotional states, with the help of unwitting accomplices captured from feature films and the television screen. Subtle in scale: a whisper in the ear rather than a shout across the room, their textured surfaces contain intriguing hints of the depths of emotion below. Forever given pause, these oil paintings make comment on emotional entanglement with the artificial as a substitute – or perhaps immunisation against- the fluctuating feelings of everyday life.

Daily Drawings – an observational drawing in ink each day since 1 January 2012- is now in the ninth year.

An interview with The Palette Pages here: the palettepages interview

What’s your earliest memory or experience with art?
I have a very visual memory. I remember Dad reading Rupert bear comics to me when I was a toddler: I’d look at the pictures, trying to work out what was coming next & explain it to him without waiting for the story to catch up! Pictures have been inextricably interwoven with narrative ever since. An actual painting I remember was a woodland view that was on the wall at my Grandma’s. I used to stare at it for hours, thinking I should be able to catch a glimpse of a bird or hear the rustle of the grass. As I got older, I tried to work out how something that was just made with paint could be so real…

When did you start painting and how did that happen?
I always drew when I could. As I worked in my bedroom, I mostly stuck to colour pencils, or painted small scale sitting on my floor resting on an old piece of hardboard. When I did paint I found it frustrating: watercolours weren’t intense enough & acrylics dried too quickly. Then I finally got to college & had a studio space where I could make a mess! I got to try oils & I immediately fell in love.

What sort of emotion does art create for you? Is it therapeutic, spiritual, energising, destructive? Do you feel like you have to suffer in order to create?
Art can be all of those! Sometimes ideas work straight away, sometimes they need thrashing out again & again, or even restarting. That said, I don’t abandon many pieces: another advantage with oil, I can obliterate what’s gone before if I want to. I don’t think suffer is the right word. It’s never as frustrating for it to go wrong as it is to be unable to work!

Can you describe for us the origins of your transference process and aesthetic? How did that come about?
I discovered my process through the needs of work. I needed more people to draw. So I turned to the ready stream of ‘sitters’ provided by the TV. I used a 35mm film camera & paused videocassettes to take photos, so I didn’t’ know what results I would get until I collected my prints back from the chemists (I did do my own developing, but not in colour). As well as faces I found weird moiré patterns, bizarre unexpected colours, blurs, fades, multiple images. There was more depth & intrigue to paint in a few stills than I had found anywhere else!
Having pursued this technique for about twenty years, I find that I get the most satisfying results from images I’ve taken from a context I know very well, such as a film I’ve watched repeatedly. My own emotional reaction gets mixed in with the paint somehow.

What is it about human nature, and in particular human emotion that intrigues you?
People are a mystery! They say one thing, & do something completely different. Sometimes you can see that they are thinking quite the opposite… an isolated split second can be painstakingly recreated in paint: examined, re-examined & heightened. Not something possible in real life!

Who or what are some of your greatest influences/inspirations?
This would be a huge list! & It would have to include painters, filmmakers, authors, musicians, scientists…

Best advice you ever received?
From one of my tutors on my foundation course: ‘You know you can paint, I know you can paint, but knowing it doesn’t work. You have to show it in everything you do. Every time.’ I have to think ‘That’s it’ before I call something complete now. Never ‘That’ll do’- it won’t!

What are you currently working on? Any big projects?
The series continues! It’s an ever-evolving process. I’m intrigued by the possibilities that technology & reproduction offer to transform my work: adding more layers away from the ‘original’. I am working on a project to develop my Daily Drawings into print & I’ve had proposals to make my paintings into digital projections.

What has been the most memorable moment in your career so far?
I had a proper dream come true recently. I got to paint a portrait of Martyn Ware (Human League/Heaven 17) who has been my hero since I was a teenager. He liked it so much he now has it on his living room wall! It’s very weird to think that I’ve been drawing him since he was a poster on my wall… It’s not often you get to fulfil a 30 year ambition!

What is your next challenge? Where do you hope to take your art next?
Keep on painting, & paint & then paint some more! I want to get my work out to a wider audience too: more exhibitions, in different places & through different media. Watch this space! 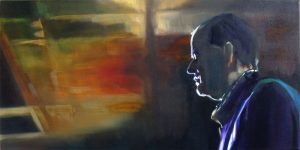 I got to appear on Bolam TV with Martyn Ware this year. As well as putting the world to rights, we also talked about my painting! You can watch it on Bolam TV

If you like my work, please consider helping by 'buying me a coffee' through Ko-fi; the site for supporting all kinds of creative people